The FRED (Flexible Recreational and Educational Device) concept was used by RCA for multiple prototype computers eventually resulting in the release of computers like the VIP and Studio II. The FRED 1 emulated by Emma 02 is based on the information found in this manual as well as games found on different tapes from the The Sarnoff Collection at TCNJ.

This is the only emulated computer in Emma 02 which is not using a CPU from the 180x serie. Instead it is using a chip set as was used in the RCA SYSTEM 00 protoype. The SYSTEM 00 chip set uses a subset of the 1801 instruction set with some incompatible differences and is likely what the 1801 was based on.

FRED 1 running the bowling game which uses bowling sounds from tape when rolling the ball. 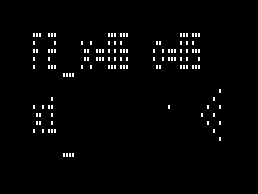