This page lists most COMX software designed by F&M, i.e. my brother Frank and myself. I have described all software shortly and added some screenshots. I’m afraid in those days we did a lot in Dutch but some of it is also available in English. If I remember correctly West Electronics asked us to make an English version of the ‘Turbo Loader’ and the ‘Text Editor’. Recently I also made a translation for Happiehap, Trainspotting and Tennismania.

All this software is downloadable in ‘.comx’ format from here, most also from the COMX Club pages and of course everything is included in the emulator installation package.

This must have been our first real programming effort. A simple memory game in BASIC. An attempt to create a chess game for the COMX. This game was never finished, it ‘knows’ the chess rules BUT is not able to play itself. So in a way not very useful. However it has amazing graphics (for COMX standards) done by Frank. Note also that to create the chessboard we used NTSC mode of 6*8 characters and 4 characters made up one chess piece, this resulted in a bit ‘squarer’ board even on PAL TVs!

Versions available: 1, 2 and English. The one and only Pac-Man clone for the COMX. I think this was our first attempt to use 1802 machine code. This won first price in one of the West Electronics SW competition. See also screenshot on the main COMX-35 page.

Simple race game however designed for use with the F&M Joy Card with 2 players and 2 joysticks.

Pong clone for the COMX. Ok this one is not fully F&M, actually we wrote this with our cousin, Steven de Vries and decided to put his name on it only! For a screenshot see the Did You Know...? page.

This was never finished. Again very nice graphics done by Frank; especially Kong is impressive! Just try the game in the emulator and see how Kong’s arm moves when he throws the balls. 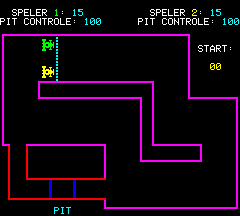 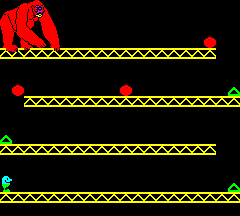 Written in BASIC, graphics again brilliant, thanks to Frank. You will get loads of 'train' pictures and you need to spot which two are the same. I recently managed to port this game to the Pecom 64 which has very similar BASIC as the COMX, see the main Pecom 64 page for a screenshot.

This was also never finished, I think the idea was to make a cross between ‘Eet een wurm’ and ‘Pac- Man’. We never even gave it a name but I always liked how the snakes moved in the Pac-Man maze.

Very basic but simple to use text editor.

Versions released: V1.00, V2.00 and TOS V3.00. Software allowing faster (and less reliable) cassette loading. The COMX cassette routines were known to be quite slow, especially the unnecessary tones used after every 256 Bytes slowed down loading a lot. The F&M turbo loaders did not have the intermediate tones and also used faster/higher tones to represent the bits. Like the COMX Init this initializes (formats) a floppy disk. But F&M Init also replaces the standard boot procedure with a new version. The new boot procedure adds loading and running a program called ‘Startup’ at the end. This ‘Startup’ program could be any user specified software. So when any of the floppy disks with the new boot version is used the program ‘Startup’ will be loaded and started after the first DOS command is used. Allowing automatic starting of software on the disk. All disk tools can be downloaded in the disk tools image

An example start-up program showing all programs on disk and allowing starting them from a menu.

Locks all software on the disk.

Unlocks all software on the disk.

Disk copy program copying a complete disk; however the destination disk will have to be formatted in advance via the INIT program.

A ‘monitor’ program allowing changing of disk content directly. So any sector on the disk can be loaded and changed, including  boot category sectors. Simple drawing program using pixels. This is using the COMX and CDP1869/CDP1870 to the max, as also described on the Video Interface System page, using a resolution of 108x112 pixels. Different modes are included where not all use the full screen.

Same as F&M Pixel Tekenen except using the F&M Joy card joystick to make the drawing.

Similar as Pixel Drawing, however this software allows to do the drawing from BASIC commands (via CALL instructions). The '+' version uses the double width and double height to fill the screen with the 108x112 pixels.

Standard 'monitor' program to write machine code software (using hex code) and to inspect memory. The program also includes some simple tools for moving code, register inspection and clearing memory. One very handy feature is the ability to insert 'NOP' (or #C4) instructions anywhere in the written code and at the same time 'translating' 1802 branch instructions, i.e. changing the destination address if changed by the 'insert'. This includes additional 'inserts' if a short branch had to be changed to a long branch and as such needed 3 bytes instead of 2; also the branch itself will in such cases be changed to a long branch.

Simple program to show a clock on the BASIC screen; while still being able to use BASIC as normal. The ROM on the printer CARD had quite a bit of unused memory so we designed a new ROM with some additional handy routines like: shaping of small character, recall of BASIC after a RESET and the Turbo cassette routines.

Starts up as F&M BASIC V3.10. This can only be used as ROM and the ROM needs to be in the Expansion Box. We used a few tricks to make this work, first the expansion ROM already replaced part of the BASIC ROM from @1000-@17FF so it was easy enough to change things in that part of the ROM a bit more. Also like the 80 column card this software changes the standard input and output routines to some small routines in the expansion box ROM. Last we needed a simple way to 'read' what characters were on the screen, default the CDP1870 page memory can NOT be read out. However the character memory can be read, so at startup of BASIC we added a 'shaping' routine changing line 10 of every character to be equal to the character number. Line 10 is not shown on either PAL or NTSC screens but is still stored in the character RAM. So by reading out line 10 of the character on a specific position we were able to detect the character number. This simplified things in such a way that there was no need to use any of the user RAM for a copy of the screen like we did in F&M Basic V2.00. We did also spend quite a bit on optimizing the code as there was only a small amount of free memory in the original expansion ROM.

This is the latest addition released in 2014. It isn't really F&M SW as I put this together myself, still it is using some F&M code! Also this is probably the most extensive COMX package available so I though worth mentioning on this page.

The FW is stored in three 32K EEPROMs. Used as follows:

All the HW was built by Ed Keefe see also his Super Board page for details about both the HW and SW.