Here are some interesting things about the COMX computer that you might not know:

The most famous bug in the COMX BASIC ROM: type line number 65535, the COMX will stop working and the screen gets all messed up. Don't do this after spending hours typing in some BASIC program!

A similar thing as using line number 65535 is typing in 'READY', after this the COMX is not 'READY' anymore! F&M (that is me and my brother) discovered this one when they designed the F&M screen editor and pressed 'CR' (return) on the 'READY' prompt. As such they decided to change the prompt into 'OK' to avoid too many accidental crashes when using a screen editor. After some tracing in the emulator I discovered this is actually caused by the BASIC READ command, when a READ Y (or any other READ) instruction is given when there is no DATA statement in the loaded BASIC program the COMX will hang.

Another bug we recently rediscovered, is that the '!' in the original COMX has a funny red dot. I corrected that in the ROM file comx35.1.1.bin which is now the default ROM file for the emulator.

I also created a comx35.1.2.bin, this version doesn't really fix a bug but is a rom file to handle the lack of DRAM refresh in the COMIX. The only difference with 1.1 is that the interrupt executes one extra LDA R0 which will secure that R0 is constantly incremented (be it with a slower speed compared to the COMX).

Recently I rediscovered the annoying bug in the ROM causing some address values to be corrupted on a reset (4FF7 to 4FFF). This is caused by the fact that the stack counter is initially loaded with 4FFF. Later in the start up it is changed to BDFF. It was possibly designed to work on a COMX with only 4K RAM. I fixed this in comx35.1.3.bin, the 1.3 version is now the default rom file for the emulator when used without SuperBoard

If you manage to play the game 'Eet een wurm' long enough it will eventually run out of places to put new 'food' and as such slow down the game almost to a stop! F&M managed to do this and also solved this bug at the time. The corrected game including some additional improvements and is included in the emulator installation package as 'Eet een wurm 2'.

F&M also fixed some bugs in the 'COMX Draak' game, this version is also included in the emulator installation package!

The company importing the COMX in Holland, West Electronics, provided almost all their software for the COMX for free and without copyrights (or for a small fee for tape, disk and/or shipment). Most of this software is now available in the installation package of the emulator.

West Electronics also organized different competitions for home made software, some software that ended in the top 3 that I can remember: 'Bowling bal', 'Happiehap' and 'Spellenslag'. All games are available in the emulator installation package, including an English translation of Spellenslag, renamed to 'Tennismania' (see screenshot).

On the real COMX you could adjust the VIDEO and SYNC signal with a small screw under the COMX-35, some people in Holland gave this a try and managed to damage the screws completely. 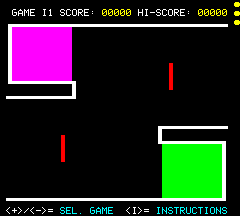 F&M managed to build their COMX-35 PCB into an old Commodore PET 8096SK keyboard as their keyboard was getting very bad. This did cost them some sweat and almost tears as initially it would not boot up anymore. This 'thing' is still up in an attic somewhere in Holland.